A new release of the system was rolled out today that includes two major new features and a number of changes 'under the hood'. 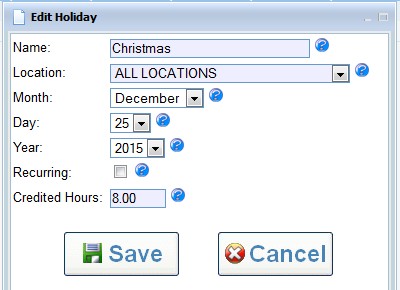 A Paid Holiday system has been added that is an almost a direct mirror of the system found in our desktop time clock software. Holidays can be managed from the Manage Data->Manage Holidays screen. Like most other things in the system the account administrator can create holidays that affect all your time clock locations and location administrators can create holidays that only affect their own location.

Create holidays to represent paid days off like Thanksgiving or Christmas Day. Holidays can be created for a specific date in a year, or can be marked as recurring if they happen on the same day each year. You can control if an employee gets paid holidays via their Payroll Information screen. You can also override the hours credited to an employee for a paid holiday on that same screen.

If an employee is eligible for paid holidays and a holiday falls within a reporting period then the employee will be credited a number of hours for that holiday. Those hours will not appear as a time punch on their reports. They will appear in the Payroll Summary section of the reports looking something like this: 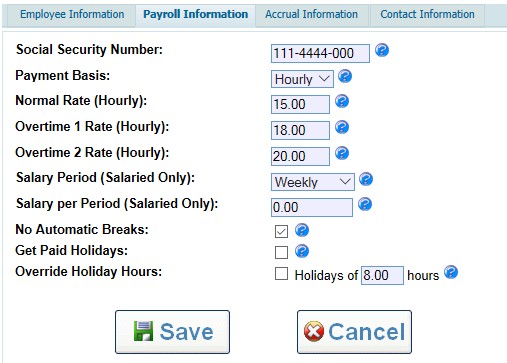 We've fixed up a couple of minor issues with the time clock system, particularly in the area of permissions. There's also been a description field added to the Login Access Control screen to make those a bit easier to organize. Finally, there's also been a considerable amount of time bringing some of the backend code up to a point where it can be used to work with an Online Time Clock MTS interface designed specifically for mobile devices. That interface, is the next major update planned for the system.

We've been working on an update to Time Clock MTS for several weeks now and it's about ready to be rolled out. The new update adds paid public holidays, salaried employees, some small changes to the IP address restriction features, and a bunch of code changes to speed things up across the board. We'll be rolling out the changes this Sunday, 21 June so the system will be unavailable for around 2 hours on that day from 4.30PM PDT. Further notification of the exact period of down time will be made prior to the day.

Documentation will be updated in the next 48 hours to account for these new features.

Downtime confirmed for 4.30PM PDT on Sunday 21 June. The system will be unavailable for 2-3 hours.