However, those users who are tracking three or fewer employees from just one Location can keep using Online Time Clock MTS as a free web based time clock system for as long as they stick to the employee and Location restrictions. You can read more about our free web based time clock system and the restrictions that will apply to your free account. The changes required to allow those with an Online Time Clock MTS account to transition smoothly to a free account were made today. So, those of you with three or fewer employees and one location will be able to keep using Online Time Clock MTS to track your employee time and attendance data without interruption.

Online Time Clock MTS on an iPhone or iPod Touch 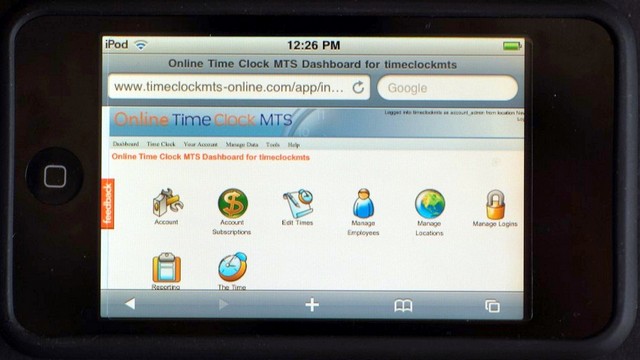 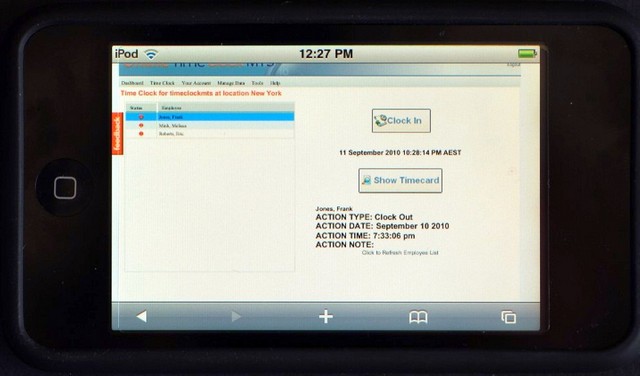 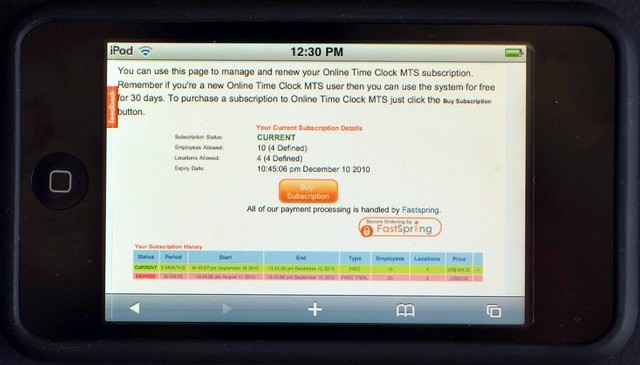 As I mentioned in a previous entry there are now some animated Online Time Clock MTS demonstrations available. I've posted a new one today that takes the new user through the Time Clock screen, including what each part of the screen does and then how to use it to clock an employee in or out as well as view their timecard. This new tour is highly recommended to new Online Time Clock MTS users, so please head over and take a look at theTime Clock Screen Tour.

In the past we've found that animated tutorials are by far the best method of conveying new ideas and concepts to users and because of this we've started developing animated tutorials for Online Time Clock MTS. There's only a couple available for now and they can be found over on the Online Time Clock MTS Tutorials page. Of particular interest right now is the Online Time Clock MTS Dashboard Tour. This demo conveys several important aspects to the new user of Online Time Clock MTS, including the ideas of locations, employees, and logins. Anyone who is new to the system (or an existing user who is unclear about what a location is) would be well served by sitting through the Tour. It only takes a few minutes and conveys more information in that time than 10 of my blog entries possibly could. Head on over and take a look.

Being able to purchase an Online Time Clock MTS subscription is not an immediate problem to any user of the system just yet because everyone is either operating during their free trial period or running on a free subscription because they took part in the BETA testing phase of the system. However, we've been working hard in the last week to develop a subscription payment system that is both easy to use and understand. While we're not quite finished yet we're pretty sure we've accomplished both of these goals and have put a system in place. You can now purchase subscriptions via the Account Subscriptions page from within your Online Time Clock MTS account. We're using Fastspring to handle all of our payment processing as we've used them for several years now and they have proven to be extremely reliable and security conscious. For the short term we've just implemented one off billing for subscriptions and we're working hard with Fastspring to develop a recurring billing system. This should be available in the next few weeks.

If you're wondering how subscriptions will work please take a look at the new animated purchasing Online Time Clock MTS subscriptions demo.

We've called the Online TIme Clock MTS BETA test period to a close today. Those of you who signed up for an account during the testing period will have received an email by now notifying you of this as well as giving you details of your free subscription for taking part in the testing. Most users will have received a 2 month subscription with others getting a 3, 6, or even 12 month subscription. Many thanks to those who helped us out with tracking down bugs and making suggestions for improvements. We plan on keeping up with this continual improvement now that we've entered the commercial phase of the product and we hope you'll all remain a part of this process.

On the what's coming up side of things, work is well under way to include sick time and vacation accruals followed closely by paid public holidays. Look for this in the next 4-6 weeks.